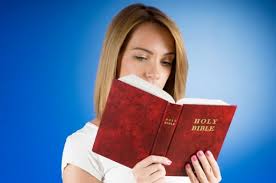 A couple of days ago, somebody started talking about a theological topic and I wasn’t exactly sure what my thoughts on the subject were. So I went home that night, bowed my head, and said, “Lord, I’m confused about this topic. Please make it clear for me.” Then, you know what I did? I opened my eyes… and began to make dinner for myself.

As I began to make my nutritious, healthy meal (okay… as I began to reheat the take-out I had ordered the night before), I stopped and really started to think about what just happened. I looked at my Bible and realized – I was just talking to the Maker of the Universe, and I treated it as if it was “no big deal.” The Lord gave me His Word, and made it so easily accessible, because He wanted me to study it. I asked Him to make something clear to me, but with no effort on my part. He can answer my questions, but He wants me to study and learn the answers. If He just gave me the answer, that wouldn’t be as fulfilling and I wouldn’t learn as much. It’s when I really sit down with my Bible, open it, and instead of asking God to tell me an answer, I ask Him to teach me the answer, that I get so much out of my devotions.

The book of Acts talks about Paul, Silas and Jason, and how they were persecuted by the Jews in Thessalonica. Soon, Paul and Silas were sent to Berea, where they continued to preach the Gospel. Now, since the name of Jesus will always spark reaction, the Jews in Berea really reacted to what Paul and Silas had to say. They weren’t sure if the two men were speaking truth, so they studied the scriptures to find truth and many of them came to belief in Jesus Christ.

“Now the Berean Jews were of more noble character than those in Thessalonica, for they received the message with great eagerness and examined the Scriptures every day to see if what Paul said was true.” – Acts 17:11

As I began praying and trying to find every verse I could which related to the topic, I felt such joy. I was learning and understanding, and I was able to come up with a conclusion. His Word is “quick, and powerful, and sharper than any two edged sword, piercing even to the dividing asunder of soul and spirit, and of the joints and marrow, and is a discerner of the thoughts and intents of the heart” (Hebrews 4:12). We just can’t take that lightly. Prayer is so important, and studying the Word along with prayer is necessary and powerful. If we really want to know His ways – we need to study His Word.

Erin Culleny is a new member of America’s Keswick’s full-time staff. Erin serves as a Marketing Assistant and Staff Writer. She had served on Summer Staff since 2011, and this past summer had the unique opportunity of co-directing Children’s Ministry with one of her best friends. She is very excited to continue to build relationships with the guests and be very involved in the ministry.